The national Index score leaped 38% from 24.2 out of 100 last year to 33.5 this year, revealing Australians over the past year have taken a keener interest in their life insurance in its various forms: life, illness, disability and income protection.

TAL Chief Customer Service and Operations Officer Penny Coates said although she was pleased the Australian Financial Protection Index has risen over the past year, the overall score was still low indicating there was much work yet to be done to improve financial protection levels.

“While underinsurance is still is big problem in Australia, the  TAL Australian Financial Protection Index scores have increased in their second year indicating progress is being made to improve financial protection and close the nation’s big underinsurance gap,” Ms Coates said.

“Why has the Index score gone up nationally and across all the demographic groups? I think awareness has been improving, consumers are being more active, and in particular younger generations are taking matters into their own hands empowered by the digital world.

“We know that the life insurance industry has been paying more claims in recent times, and for TAL record claims, demonstrating the high value and need of life insurance in protecting customers and their families when they most need it in life.”

The 2014 Index results are being released as part of a new initiative developed by TAL, called Voice for Life. This initiative will better inform and educate customers and the broader community about the crucial societal role of financial protection. There has been a lot of commentary around the state of the life insurance industry recently. We believe that life insurance has a sustainable future and key to this is championing better outcomes for consumers.

Of all the demographic groups researched, Generation X (aged 35-49), higher income earners, those with children at home, those with mortgages and those who declare themselves as risk takers scored the highest index results at around 40 out of 100.

More than 1200 Australians were surveyed on the types of life insurance they held, as well as if they felt they had enough cover if they or their partner could no longer work. The results were modelled to calculate a score from 0 to 100 where 100 indicates that people have each form of life insurance and that they believe they have adequate coverage.

The results of the study suggest that while the majority of Australians still do not believe they have enough financial protection, the gap is slowly closing.

Ms Coates said: “Take-up of life insurance has continued to increase, particularly through superannuation, but the low scores reflect that on the whole there is still a substantial gap between the level of cover that people think they need and the level of cover they actually have.

“The challenge for the industry is to convert awareness of the problem into action to address the issue, and the TAL Australian Financial Protection Index is a tool to help us do that.”

Ms Coates added: “Twenty per cent of people still have no life insurance and acknowledge this is not an adequate situation which is very worrying. Even more concerning is the fact that lower income earners make up a large percentage of those who are most underinsured, yet these are the very people who can least afford the financial pressure which comes with the death, illness or injury of a member of the household.”

The survey found that the Financial Protection Index score peaks in the Gen X age group with scores lowest among those aged under 25 years.

Ms Coates expanded: “We see the highest Index scores among households with dependent children, those with a mortgage and those with higher incomes. The Index scores for all of the various age groups and generations tend to reflect these factors.”

In other findings, the Index revealed that for the second year in a row, take up and awareness of life insurance was greatest among those with a mortgage. In addition, mortgagees were significantly more likely to perceive themselves as having adequate protection.

Ms Coates said it is not surprising that Australians with mortgaged homes see a greater need for financial protection via life insurance products*.

“Life insurance is an important way of protecting assets, like the family home, as well as ensuring that financial commitments will be met in the event that an earning member of the household is no longer able to contribute,” she explained.

The results of the Index also shed light on how attitudes to risk can impact take up and awareness of the need for life insurance.   The Index found that those who claim to take the most risks actually record a higher Index score.

Ms Coates concluded by saying that in positive news for all Australians, the 2014 Index score for every demographic group looked at has increased year-on-year.

“Clearly, awareness of the need for life insurance is improving. Claims have risen over the past 12 months, highlighting the very real benefits of life insurance, and greater consumer activism has also helped reinforce an understanding of the financial protection that life insurance can offer.

“We hope that an increasing awareness and understanding of the benefits of life insurance will continue to help close the financial protection gap in Australia.

About TAL: The specialist voice of life insurance in Australia

TAL is Australia’s largest life insurance company with leading competitive offerings in each of its core distribution channels: direct to customers; through financial advisers; and via group and workplace superannuation schemes. With in-force premiums of $2.2 billion, TAL provides more life insurance solutions to Australian than any other insurer. TAL is owned by The Dai-ichi Life Insurance Company, Limited, one of Japan’s largest life insurers. 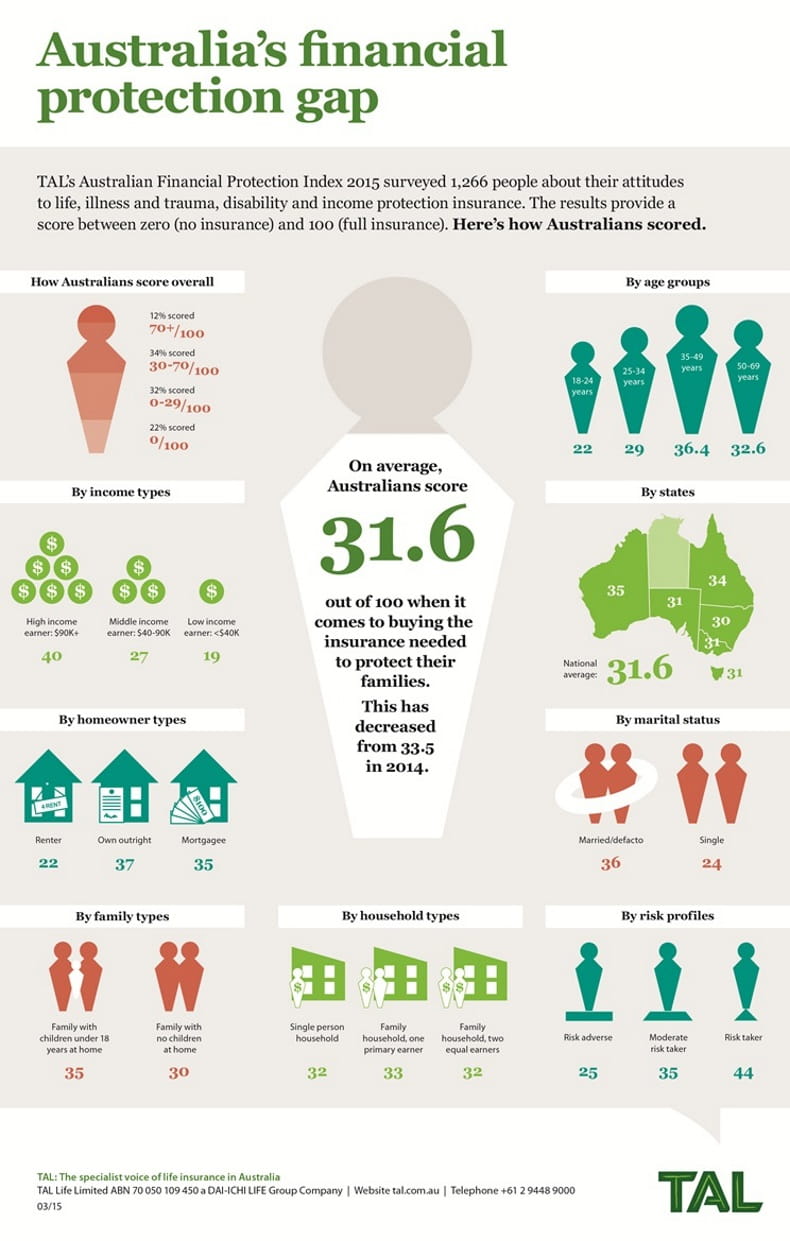 TAL focused on health for customers

TAL is committed to the long term health and wellbeing of its customers, in addition to the financial support it provides. Read

TAL committed to investing significantly over the next five years to assist advisers. Click here to learn about our new initiative with advisers. Read